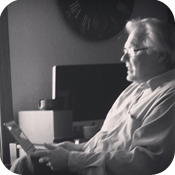 Reggie Kelly is best known to most of us as a close friend and theological companion of the late Art Katz (1929-2007).

Reggie was saved in 1969 as part of the Jesus People movement of the 60’s. He married his wife, Connie in 1969, and she followed him in baptism and service. A voracious hunger for God and truth followed. In 1975 he met Art Katz and attended the first Holy Convocation meetings in Minnesota, and many thereafter.

Over the course of 25 years, he had the privilege to accompany Art on many trips to foreign places. Reggie was a key participant at the Prophetic Schools that were held annually at the Ben Israel lodge. (Some of those recordings are available at Sermon Index). He was the teaching elder at Ben Israel for 12 yrs., up until Art’s death. He and his wife Connie have 6 children, 12 grandchildren and 1 great grandchild. They still live in Laporte, Minnesota.

Reflections on the Mystery of Israel and the Church... by Reggie Kelly

Reggie and the God’s Foretold Work crew get together on this YouTube Channel on most Saturdays at 7:15PM EST to fellowship over the Word of God.

Reggie and Travis “Teach the Timeline” and more on this YouTube Channel.

Videos from the 2020 and 2021 Convocations in Bemidji MN can be found on this YouTube Channel.

Search Mystery of Israel (Not working yet)

We’re working on getting Google to recognize the site in its new location. It has been a challenge. Once that happens this search should better than the one at the top of the page.